Negative Equity at an all time low

First, the good news: The share of American homeowners who owe more on their mortgages than their homes are worth is less than a third what it used to be.

In the depths of the housing crisis – late 2011 and early 2012 – the share was 31 percent of homeowners with a mortgage. In the fourth quarter 2017, it dropped to 9.1 percent, the first time it’s fallen below 10 percent since the bottom of the market.

The discouraging news is that 9.1 percent means 4.4 million U.S. mortgage holders still owe more than their homes are worth. Of those, 16.3 percent (713,000 people) owe at least twice as much as their homes’ value.

Among the largest 35 metros, these have the highest share of mortgages still underwater: 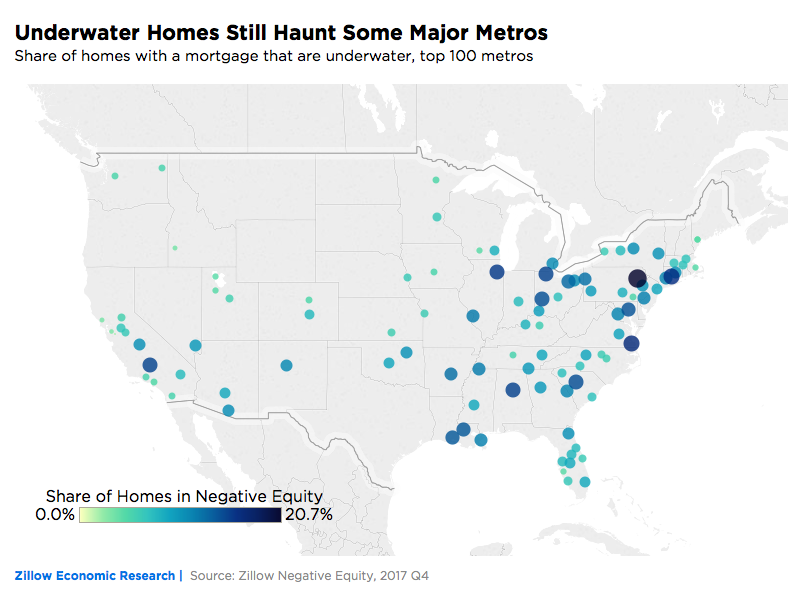 The share in Virginia Beach, Va., is down to 16.7 percent from 34 percent at its worst, in mid-2012. Virginia Beach is a military town where a lot of borrowers buy homes with zero percent down that are backed by the U.S. Department of Veterans Affairs.

Among the largest 35 metros, those with the smallest share of mortgages in negative equity tend to be places where home values have climbed precipitously: